Conservatives continue to deliver in 2014 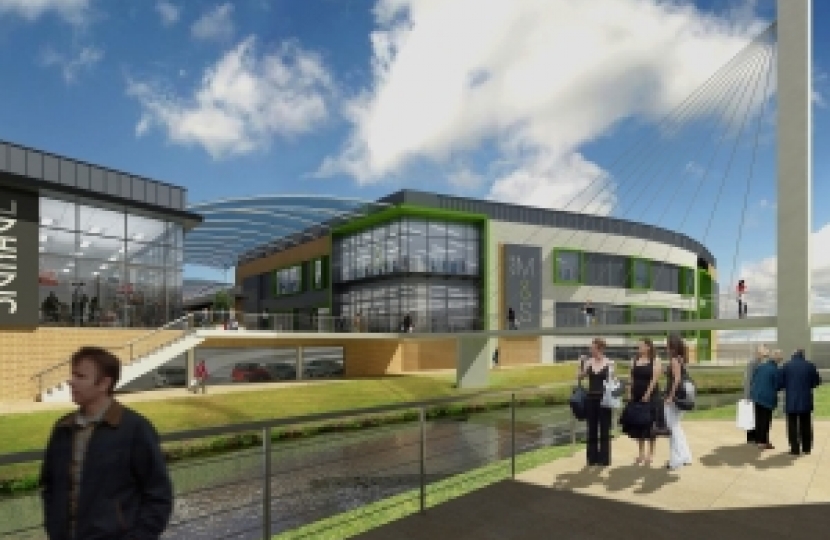 Jeremy Lefroy was elected as your Stafford MP in 2010, and still in 2014 he along with the Borough and County Council are delivering results.  Conservative leadership has brought Stafford out of its recession and is slowly but surely turning it into to a thriving prosperous town.

Work has now begun on the £70 million shopping complex in the town centre of Stafford. The Riverside development will have 18 shops, including a Marks and Spencer and a H&M, and will include a six screen cinema. The picture shows what the development will look like finished, in June 2016. The Council said the project could create as many as 650 jobs in the town, and will increase choice for shoppers, and footfall will increase in Stafford. The new multi storey car park will provide over 900 spaces and the development will have leisure units facing the river. The regeneration of Riverside will add to the recent developments Stafford has already had such as Staffordshire Place, Stafford College, Stafford Leisure Centre and Stafford Railway Station, which will lead Stafford into a prosperous and growing County Town.

After the plans to expand the MoD grounds at Beaconside were approved, Military chiefs have taken the first steps in bringing 1,100 troops home. After the move in 2015, the number of soldiers at the Beaconside Barracks will nearly treble. The new town base will include accommodation for 550 soldiers, with 29 new building and the refurbishment of 11 exsisting buildings. As well as this, the expansion will include storage buildings, workshops, vehicle washes, a gym, offcies, training and mess facilities. For soldiers recreation, there’s an all weather sports pitch, a wildlife corridor, a medical and dental centre, garage blocks and eight new car parks.

Construction of the Redhill Business Park in Stafford, just of the A34, the north of Stafford has begun. The business park completed could create more than 2500 jobs, and is aimed at businesses in the reasearch and technology sector. The park would enable businesses to set up manufacuring and prodcution units. The park was estimated to be fully completed by July 2013, but due to several mishaps, the final completion date is set to be at the end of March 2014.

With the route of HS2 being announced, we know it will run through points of the Stafford constituency. Jeremy Lefroy, as well as other Stafford residents are completly opposed to the development. There are many reasons we oppose to the development, the main being being the effect it will have on many of the constituents. The train’s route would blight their home, and damage the surroundings. As the disturbance of the train wouldn’t be out of their accord, we are looking into compensation for all those directly affected.