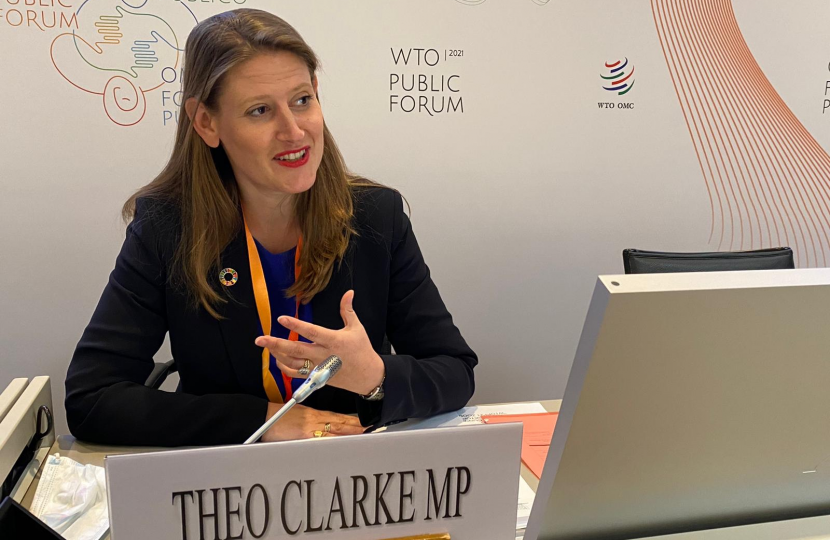 Theo Clarke MP for Stafford: Global Britain is making impacts in ways that China’s Belt and Road initiative can only dream of achieving

It has been three and a half years since the Commonwealth Heads of State summit in London on those sunny days in April 2018. In that short space of time, and despite the ravages of Covid, the UK has been busy transforming trade right across the Commonwealth. From Ottawa to Mumbai, from Kampala to Canberra, Global Britain is making trade cheaper, easier and faster. And the best part is that we have only just begun.

This week, I visited the World Trade Organisation in Geneva, and met Commonwealth Ambassadors from Australia, South Africa, Nigeria and Jamaica to name a few, as well as the new WTO Director General, Dr Okonjo-Iweala Ngozi.

With the UK retaking our seat as an independent member at the WTO, there was a real buzz about the way we are re-galvanising trade right across the Commonwealth’s huge market of 2.5 billion people.

Since the Commonwealth London summit, the UK has championed the launch of the Connectivity Agenda across the entire Commonwealth, and signed new trade deals with more than a dozen countries in Africa; all across the Caribbean and the Pacific; and with Canada and Australia.

Next on the to-do list for our new Secretary of State for Trade, Anne-Marie Trevelyan, will be to expand these deals to cover new topics like financial services and e-commerce, whilst negotiating the next wave of Commonwealth trade deals with India and New Zealand.

So we have succeeded in signing trade deals with big African economies like Ghana, Kenya and South Africa, but what about other Commonwealth developing countries where we don’t yet have trade deals?

To make sure they were not left out, in January 2021 the Government launched our own preference system to cover imports to the UK from those countries. In many cases, the scheme reduces tariffs to zero on products made in the poorest countries like Sierra Leone, Bangladesh or Zambia. This scheme secures both millions of jobs in Commonwealth Africa and Asia and supply-chains of clothing, tea, coffee, fruit and vegetables for UK consumers. It is a pathway for these countries to graduate beyond aid, and to trade their way out of poverty. The Government is now looking to improve the scheme further, so the UK can set the standard for the rest of the G7 to follow.

But transforming trade in the Commonwealth takes more than just signing trade deals and reducing tariffs. Here again, Global Britain is leading the way, leveraging the world-class capabilities in the UK’s aid programme led by Liz Truss at FCDO. In East and Southern Africa, for example, the UK is leading a coalition of countries, including G7 members like the US and Canada, in an Aid for Trade initiative to slash trade red-tape and upgrade ports and transport corridors from Ethiopia right down to Mozambique.